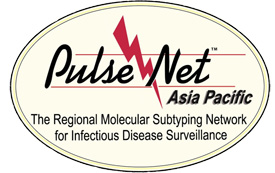 Established in December 2002, PulseNet Asia Pacific is picking up its pace as a molecular subtyping network for infectious diseases surveillance in the region. Pulling together efforts from thirteen countries and areas, members meet annually to share their advancement in local foodborne/infectious diseases surveillance system and discuss key issues to attaining our common goal to facilitate the timely exchange of DNA fingerprinting data of these pathogens.

With this network of people, key issues such as formation of steering committee to lead the development of the network, setting up of work groups to address major concerns, recognizing sources of funding for supporting countries/areas projects and laboratory capacity building, and commitment to expand and sustain the network were addressed in annual meetings in Honolulu (2002), Hong Kong (2004), Tokyo (2005) and Nanjing (2006), Kolkata (2008), Bangkok (2009). and Hong Kong (2010).

Initially, PFGE laboratory facilities in PulseNet Asia Pacific members ranged from fully equipped with hardware and software to those start from scratch. Hence, laboratory capacity building is the first priority so that our target of a regional network for infectious diseases surveillance will be achievable. At least one PFGE system is installed in all the participating laboratories with tremendous effort of Laboratory Resources and Support Work Group that are coordinated by Dr. Watanabe of Japan. Having common software for PFGE data analysis and management in all countries/areas will take us a significant step closer to our target.

Training is another key to the success of the network. Consequently, four PFGE workshops were held at Public Health Laboratory Centre (PHLC) in Hong Kong (HK) from 2004 to 2007. The workshops are organized with joint efforts by Center for Diseases Control and Prevention and Association of Public Health Laboratories of USA, National Institute of Infectious Diseases of Japan and PHLC of HK. A total of 35 scientists from the region attended the PFGE workshops in the past four years.

Laboratory theories as well as hands-on practices of the standardized Salmonella serotypes PFGE protocol and data analysis were taught during the first three workshops. With increasing interests in data analysis and data management, a software training workshop was delivered in mid February 2007.

The purpose of having a Platform for Interlaboratory Comparison Work Group (PICWG) is to ensure comparability of PFGE patterns among different laboratories in our network. Its main features include data shared will still be owned by individual members, and each participant will respect the confidentiality of the information.

PICWG started with Phase I in August of 2004 in which two freeze-fried ampoulesof Salmonella strains were tested and distributed to seven participant laboratories by coordinating laboratory (PHLC of Hong Kong). In return, PFGE gel images from members were submitted through email for further analysis. Finally, consensus patterns were resulted and mailed back to individual participants with comments on gel quality and suggestions for improvement. The distribution of Phase I in 2005 was identical with previous one except increasing number of participating laboratories (from seven to nine) and two different Salmonella strains were included.

With the success of Phase I, members agreed to take part in Phase II which started in 2006. During Phase II, XbaI-PFGE patterns of top three Salmonella serotype from 11 countries/areas were collected and compared. Thirty distinguishable patterns were identified from 35 XbaI-pattern submitted. Both Phases I and II will continue in 2007.

To ensure the reproducibility and robustness of standardized PFGE protocols, external validation of protocols in different laboratories are important. In view of public health importance of Vibrio species in this region, some PulseNet Asia Pacific laboratories and PulseNet USA collaborated closely in external validation and evaluation for the rapid one-day standardized PFGE protocol for subtyping Vibrio cholerae and Vibrio parahaemolyticus respectively.

Future collaboration of the network with other PulseNet international networks will be undertaken for evaluating rapid standardized PFGE protocol for subtyping pathogens of significant public health concerns such as Shigella flexneri.

Email has been the major communication tool among members of the network since 2002. Web-based discussion forums were subsequently developed by Dr. Brent Gilpin of New Zealand. The PulseNet Asia Pacific WebBoard is a convenient means of contact as well as user-friendly. It also provides different level of security to ensure confidentiality of information exchange.

Looking into the future

PulseNet Asia Pacific laboratories will continue to work on a common Software platform for inter-laboratory comparison, and addressing the training need of member laboratories. There is also the possibility of expanding the organism coverage in the PICWG, and further encourage discussion and information exchange. With provision of adequate resources, it is envisaged that there will be enhanced collaboration among different laboratories and among different PulseNet International Networks.